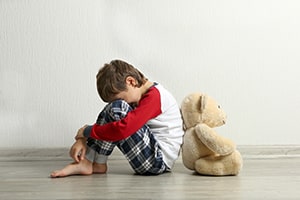 Child abuse can manifest in several different forms and categories. Generally, there are four different recognized types of child abuse: physical abuse, neglect, sexual abuse and emotional abuse. Each different type of abuse can have its own signs and symptoms and all can cause serious harm to a child’s wellbeing and development.

The physical abuse of a child is defined as non-accidental physical injuries that are caused by the use of physical force or an object or weapon and is inflicted by a parent or other caregiver. Injuries can range from minor abrasions to serious injuries and even death. These injuries received by children may be considered physical abuse even if it was not the intent of the parent or caregiver to harm the child. Physical abuse can have long-lasting physical and emotional effects on a child and can trigger violent behavior in the child. Physical abuse is often recognized by teachers and other mandatory reporters and can lead to criminal and child services investigations against parents.

Neglect can also occur where a parent is emotionally neglectful and does not pay attention to a child’s emotional or psychological needs. In some cases, cultural values, poverty or a lack of education can cause a parent to be neglectful. In the most serious cases, State child services may need to become involved and the child may be removed from the home.

Sexual abuse is one of the most egregious forms of abuse and includes inappropriate touching or fondling, penetration, incest, rape, sodomy, indecent exposure and sexual exploitation through prostitution and pornography. Sexual abuse of minors can carry lifelong effects on the child’s physical and emotional wellbeing. Sexual abuse against minors is a serious felony and those convicted can expect to be placed on sex offender registries in their home state. Child services investigators will often take immediate steps to remove a child from a home in which he or she is suffering from sexual abuse. Mandatory reporters such as teachers and medical personnel are required to alert authorities anytime sexual abuse of a minor is suspected.

Other Forms of Child Abuse

Many states consider child abandonment as a form of child abuse and neglect. A minor may be considered to be the victim of abandonment when a parent’s identity or location is unknown, the child is left alone and suffers serious harm or where a parent has failed to maintain contact or provide appropriate support to the child. Many states have Safe Have laws that provide secure places where parents can surrender newborn babies.

Substance abuse is increasingly considered to be a prominent form of child abuse. Such abuse can include exposure of illegal drugs to a fetus by the mother while still in the womb, operating meth labs in the presence of a child, selling or providing drugs or alcohol to a minor or use of a controlled substance by a parent or caregiver that effects their ability to care for the child.