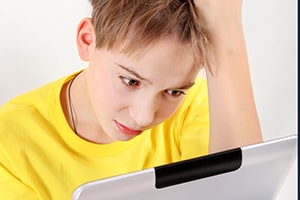 The Internet can open up a wide variety of educational, social and creative options to children, however there are many dangers that lurk on the Internet and parents and caregivers should be aware of these dangers. The following are the more common dangers that affect children online.

With the prevalence of computers, smart phones and tablets and the extreme popularity of social media, more and more children interact with their peers exclusively online. Not all of this interaction is positive and there has been a significant rise in cyberbullying, which can be pervasive and can sometimes lead to tragic results. Parents are often not aware about how critical an issue this is for children, however the effect that cyberbullying can have on child’s life and wellbeing is significant.

Cyberbullying is when someone is bullied using electronic media and can include threats, intimidation, defamation, harassment, rejection/exclusion, identity theft/impersonating someone online, publicly disclosing private or embarrassing information and manipulation.

Bullying has always been considered a significant problem for young people. However, cyberbullying is even more severe because it can reach a large audience within seconds and it can provide a degree of anonymity to the perpetrator.

“Sexting” is considered the exchange of explicit messages and photos between minors and their boyfriends or girlfriends or with other people they have met online. Exploring sex and relationships is a normal part of adolescent development, however sexting can create a number of different problems.

Sexting may start out as a seemingly harmless activity, however it can often cause emotional distress and can lead to negative comments or bullying if the images sent privately are publicly disseminated. This can harm a child’s reputation at school and with peers and material disseminated online can still be found years later. In some cases, what a minor has disseminated can affect a child’s education and employment options.

Additionally, sexting involving minors can often violate laws involving child pornography and the sending and dissemination of images can lead to criminal charges for all parties involved.

Online grooming of minors by strangers they meet online is intended to take advantage of a child’s naivety or trust and can expose a child to a wide variety of dangers. Many people take advantage of the anonymous nature of the Internet and adults may infiltrate websites aimed at minors by pretending that they are much younger than they are. Grooming involves meeting and establishing a relationship with children in order to take advantage of them sexually. Half of all minors acknowledge communicating with others they do not know when using social media and the presence of grooming and online predators is a significant problem.

Sexual predators online will take steps to gain the trust of children online. They will establish a rapport with the minor and will eventually steer conversations to sex. The adult may ask the child to send explicit photos or videos of themselves and will persist until the child relents. In some cases, the adult may try to meet the minor in person and may travel from great distances. The adult may also attempt to manipulate the child by threatening to expose them with the videos or photos previously sent.