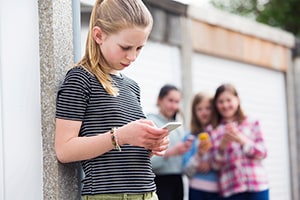 Bullying between children has always been a problem, however new technologies have made this problem more pervasive and have provided it further reach. Cyberbullying often has real world consequences for children and can lead to devastating and tragic results.

Cyberbullying is defined as the use of technology to harass, threaten, embarrass, stalk or target another person and often persists among young people. As social media has become an increasingly pervasive part of young people’s lives, cyberbullying has become more and more common. The National Crime Prevention Council defines cyberbullying as “the process of using the Internet, cell phones or other devices to send or post text or images intended to hurt or embarrass another person.” This behavior can involve posting rumors about another person online, making threats, sexual remarks, disclosing private information, hate speech or creating fake profiles to harm another person.

A 2004 survey has revealed that 42 percent of children report being bullied online and 25 percent report it has happened on one or more occasion. 35 percent report being threatened online and 21 percent acknowledge receiving threatening emails or text messages. Nearly 60 percent of the children interviewed acknowledge that someone else has said mean things to them online and the same percentage report that they did not notify their parents when this had happened.

Sometimes cyberbullying can be easy to detect, such as a mean text, tweet or online communication received by a child. Other acts can be less obvious and may involve impersonating the victim online or posting personal information or photos designed to hurt or embarrass the victim.

Cyberbullying can be especially devastating because its reach is far-reaching and rumors, photos and insults online can be disseminated to a wide variety of people within minutes and can stay online forever.

Cyberbullying can be especially damaging to children due to its pervasiveness. Before the advent of these technologies, bullying was basically limited to school and a child’s free time with peers. However, the Internet and social media has made it possible for children to always stay connected and a victim of cyberbullying can be exposed and barraged with harmful material 24 hours a day.

Studies have shown that long-term exposure to cyberbullying can lead to the development of anxiety, depression and other stress-related disorders. Children who are the target of cyberbullying may suffer academically and socially and may become withdrawn and uncommunicative. In some highly publicized cases, persistent cyberbullying has led to suicide.

Children who are suffering from cyberbullying often resist telling parents or teachers as they may be ashamed of the social stigma attached or they may be concerned that their computer privileges may be revoked. Signs that a child may be the victim of cyberbullying include becoming upset during or after using the Internet, being increasingly secretive about his or her digital life, withdrawing from family or social life, avoiding school, falling grades or acting out at home, changes in mood, sleep habits and appetite, a desire to stop using the computer, appearing nervous upon getting a text message or email alert and avoiding conversations about computer and cellphone use.

When cyberbullying drives a child to harm or kill themselves, there may be an extensive criminal investigation conducted to determine what effect the bullying had on the death of the child. In some cases, this can lead to criminal charges against those carrying out the bullying or encouraging the victim to commit suicide.