Kids and Offenses Committed at Schools 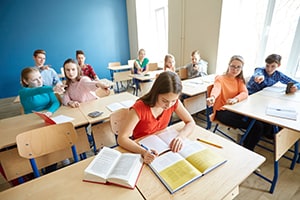 Many of the juvenile offenses that occur in California involve criminal offenses committed by minors at or involving schools and/or teachers. These types of offenses cover a wide variety of criminal activity, from petty misdemeanors to serious and violent felonies. California juvenile delinquency courts even handle truancy offenses involve minors who skip school. When an offender is under the age of 18, the matter is referred to juvenile delinquency court, which is governed by its own set of rules and procedures distinct from adult court.

One of the most common juvenile crimes involve property crimes committed at school. This includes a wide variety of theft crimes, including grand theft and petty theft, as well as offenses such as vandalism pursuant to Californian Penal Code Section 594.

As more and more minors own expensive items such as cell phones and laptops and bring these items with them to school, there has been a marked increase in the amount of theft-related offenses occurring within the California school system. When the value of the property taken is under $950, a minor can be charged with petty theft in violation of California Penal Code Section 484, which is always a misdemeanor. If the value of the property or cash stolen exceeds $950, the minor can be charged with grand theft which is a “wobbler” crime that can be filed as either a felony or a misdemeanor. With minors increasingly owning expensive items such as laptops, the act of taking a single laptop computer or cell phone can result in felony-level juvenile charges.

Another common juvenile offense occurring at schools is vandalism. Minors often may be involved in the destruction of school property or of property owned by other students or teachers. In other cases, the minor may be accused of defacing school property with graffiti. Vandalism is also a wobbler offense that can be filed as a felony or a misdemeanor depending on the value of property vandalized and the minor’s record. These cases will often be referred to the juvenile court and the minor would be expected to appear in court with his or her parents to address the petition.

After property crimes, assault-related offenses are the next most frequently committed crimes in California schools. These offenses can range from minor fights between fellow students to serious battery offenses committed on teachers or other school personnel or offenses involving dangerous or deadly weapons.

In delinquency courts, the District Attorney would file a petition describing the allegations against the minor and the charges of which he or she has been accused. Unlike adult criminal cases where the defendant is usually given the opportunity to post bail to secure his or her release pending the resolution of charges, this option is not available to minors. The judge may require that the minor remain in custody pending the adjudication of the petition or the judge may determine that release of the minor to parents is more appropriate under a strict curfew or other restrictions.

While many simple assaults are misdemeanor level crimes, offenses in which the victim suffered serious bodily injury or offenses involving use of an object or weapon can elevate the case to a felony. These offenses are treated very seriously by juvenile court judges and minors for whom a juvenile petition is sustained can be sentenced to probation at home or at a juvenile camp away from home. The school may expel the minor. In the most serious cases, the minor may be sentenced to confinement at the California Youth Authority (“CYA”).