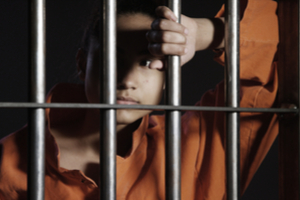 Approximately 10,000 minors under the age of 18 are housed in jails and prisons intended for adult offenders and juveniles make up 1,200 of the 1.5 million people imprisoned in state and federal detention facilities. Including children in adult jails and prisons creates a variety of risks and issues for these juvenile offenders. For example, minors are five times more likely to be sexually assaulted in adult detention facilities and are 36 times more likely to commit suicide if housed in an adult jail or prison.

States have different practices in regard to housing juvenile offenders with adults. While some states prohibit this practice, other states will regularly jail minors with adult offenders. The United States government has passed legislation to end this practice; specifically the Juvenile Justice and Delinquency Prevention Act of 1974 (“JJDPA”) and the Prison Rape Elimination Act of 2003 (“PREA”) which require that juvenile offenders be housed separately from adults. Even with these federal statutes, some states continue to house juveniles and adults together and some states have deliberately chosen to forego federal funds rather than comply with these laws.

According to the National Inmate Survey conducted by the United States Department of Justice, 1.8 percent of 16 and 17-year-olds jailed in adult facilities have reported being sexually abused while in custody, either by other adult inmates or by prison staff. Sexual assault of minors in prison is considered to be widely underreported and less than 10 percent of minors in the survey who were sexually abused actually reported the abuse.

Each year, more states certify that they are in compliance with PREA guidelines or other states have provided assurances of their intent to comply. Some states, including Alaska, Arkansas, and Utah have either ignored PREA or have refused to comply citing reasons such as excessive financial burdens and state’s rights. Even states that have provided assurances of PREA compliance, such as Michigan, New York, Texas, and Florida, continue to house adult and juvenile offenders together.

Many minors who are prosecuted and sentenced as adults suffer from undiagnosed and untreated mental illnesses. Unlike many adults who have mental health concerns, minors may not understand how to manage their illnesses or deal with conditions such as anxiety, depression, fear, and trauma. Being housed in an adult detention facility will often exacerbate mental illnesses in minors which can lead to increased suicide rates and higher rates of disciplinary infractions. Children often act recklessly which can lead to more severe punishments in adult facilities, including the use of solitary confinement which has been shown to have long-term negative effects.

In juvenile detention facilities, the stated goal is to rehabilitate the minor so that he or she can be reintegrated into society. Minors are often required to be involved in furthering their education or receiving the valuable vocational training needed to function once they have fulfilled their sentence. In contrast, many adult prison facilities are more punitive in nature and are intended to protect the public from adult offenders. Children who serve sentences in adult facilities are significantly less likely to receive vocational training and education than minors housed in juvenile detention facilities. This makes reintegration into society difficult despite the fact that most juvenile offenders are still very young when they are released. 80 percent of minors convicted as adults are released before their 21st birthday and 95 percent are out before turning 25. This has led to increased recidivism rates and minors who serve sentences in adult facilities are 34 more likely to reoffend than their counterparts in the juvenile justice system.