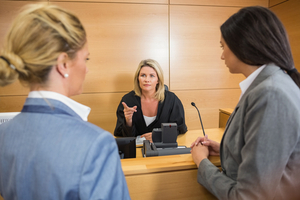 When a juvenile petition has been filed alleging that a minor has committed a criminal offense, the first appearance in juvenile court is typically the detention hearing. This is similar to an arraignment in adult criminal court in that the judge will make a determination regarding the minor’s custody status during the pendency of the juvenile court case.

What is a Detention Hearing?

When a minor is stopped or arrested for a less serious offense, the arresting officer may simply issue a notice to appear in court to the minor and his or her parents and will release the child. In more serious cases, the minor may be detained in custody until his or her first court appearance.

At the detention hearing, the juvenile court judge will determine whether or not the minor must remain in custody while the case is proceeding.

Factors to Consider in a Detention Hearing

In making a determination, the judge will typically hear from the prosecution and defense as well as the minor’s parents and the probation department.

The judge may decide to release the minor to the custody of his or her parents or guardian. In doing so, the judge may impose conditions of release that the minor would have to follow or risk being sent back into custody. Increasingly, courts are placing minors on electronic home monitoring to ensure that they remain at home while out of custody or do not violate curfew. These devices are equipped with GPS devices that can track the juvenile at all times. In other cases, the judge may release the minor to the home under strict monitoring by the Probation Department. Any violation could result in the minor being sent back to Juvenile Hall while the matter is pending.

What Else Happens at a Detention Hearing?

Similar to an arraignment hearing in adult criminal court, the minor will be informed about the nature of the petition at his or her detention hearing. Regardless of whether or not the minor is in custody, he or she will be formally notified about the charges in the petition, will be informed of his or her rights and will be asked to enter a plea. The minor, through his or her attorney, will be provided a copy of the petition and incident reports and will have a chance to review these materials.