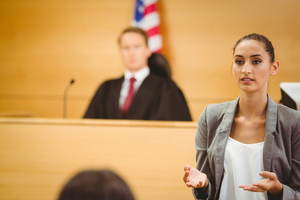 Just like adults in criminal court, a minor is entitled to a trial in which the prosecution would have to prove the elements of the crime beyond a reasonable doubt. In juvenile court, this trial is referred to as an adjudication hearing or a jurisdiction hearing. The juvenile court follows its own set of policies and procedures, however, the adjudication hearing is similar to a trial in criminal court, with the one major difference - there are no juries in juvenile court. Instead, the judge is responsible for deciding the case and determining whether or not there are sufficient facts to sustain the petition against the minor.

When Does the Adjudication Hearing Take Place?

What Happens at the Adjudication Hearing?

Just like a criminal trial, the burden of proof is on the prosecutor to prove that the allegations against the minor are true beyond a reasonable doubt. The prosecution will present evidence and witnesses that support their theory of the case. The same rules of evidence apply in juvenile court and the defense can make objections and challenge the admissibility of evidence and witness testimony. At the adjudication hearing, the minor is allowed to present a defense and can use the court’s subpoena power to compel witnesses or the production of evidence. The minor is entitled to the effective assistance of counsel and can retain a private attorney or apply for a public defender. The minor also has a Fifth Amendment right against self-incrimination and can remain silent and not testify.

The judge will hear all evidence presented by the prosecution and the minor and will hear arguments from both sides, just like in a criminal trial. The juvenile court judge will ultimately decide whether there is enough evidence to sustain the petition. If the judge finds that the allegations are not true, the case is over and the minor would be released, unless he or she is being held for another matter as well.

If the judge finds that the allegations are true, the judge would next conduct a disposition hearing, which is equivalent to a sentencing hearing in adult court. This can be held immediately after a decision has been rendered in the adjudication hearing or may be continued to a future date in order for the judge to get more information about the minor.

The minor will be deemed a ward of the court and will found to be delinquent. There are a number of different dispositions that a juvenile court judge can impose. This can include confinement in a juvenile detention facility, mandatory participation in a youth probation camp program, probation with close supervision, house arrest, counseling, community service or community labor and restitution to any all victims. The judge will typically require the minor to make periodic appearances in court to monitor his or her progress while on probation.