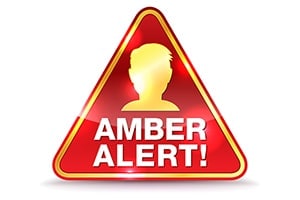 AMBER alert is a child abduction alert system that originated in the Dallas area in 1996. In issuing AMBER alerts, local law enforcement will team up with broadcasters, cell service providers and state transportation agencies to quickly issue critical identifying information about suspected missing or abducted children. AMBER alerts have become a very important tool in recovering child who have gone missing or who have been abducted.

What is an AMBER Alert?

AMBER stands for America’s Missing: Broadcast Emergency Response and was named after Amber Hagerman, a nine-year-old girl from Arlington, Texas who was abducted and murdered in 1996.

AMBER alerts are disseminated using commercial radio stations, satellite radio, television stations, cell phones and electronic traffic signs. These alerts will typically include the name, age and description of a recently abducted child as well as information about the suspected abductor, including the person’s appearance and the make, model and license plate number of their vehicle.

When are AMBER Alerts Used?

Many local law enforcement agencies have chosen not to use the second criteria, which requires that there is a risk of bodily injury or death to the abducted child. This means that many parental abductions, where the child may not be in danger, will trigger AMBER alerts.

When law enforcement believes that a child may be taken across the border into Mexico or Canada, the Unites States Customs and Border Protection, the United States Border Patrol and the Canada Border Services Agency will be notified and will be expected to conduct thorough searches of all vehicles passing through a particular border checkpoint.

When an incident does not meet AMBER alert criteria, local law enforcement will often use the Child Abduction Response Teams (“CART”) program, which involves the use of specially trained teams to recover missing or abducted children.

How Effective are AMBER Alerts?

The DOJ has claimed that over 800 children have been rescued specifically because of the AMBER alert system. They also claim that AMBER alerts are a deterrent to those who would consider taking a child and that some abductors will release a child after hearing that an AMBER alert has been issued. According to the DOJ, 75 percent of children who are abducted and murdered by strangers are killed within the first three hours of their abduction. As a result, AMBER alerts are designed to quickly inform the public whenever a child has been kidnapped in order to aid law enforcement efforts to recover the child.

Studies performed on the AMBER alert system has found that most of the alerts issued did not meet all of the DOJ criteria and half of all abductions reported were “family abductions” committed by a parent involved in a bitter custody dispute. A significant number of the abductions reported were not really abductions at all, but rather involved children who were lost, who ran away from home, whose location was unknown due to a family misunderstanding or were hoaxes.

Recent studies have shown that AMBER alerts may have had little to do with the return of abducted children and are most successful when dealing with family abductions. There is little evidence that AMBER alerts actually save lives. Due to the large number of AMBER alerts, many of which are false alarms, many child advocates are concerned that the public is growing desensitized to these messages and simply ignore them.