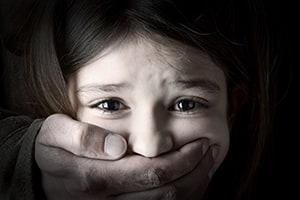 The National Center for Missing and Exploited Children estimates that approximately 200,000 of the 260,000 children abducted each year are taken by a parent or other family member. In many cases, family abductions occur in the midst of bitter divorce or child custody battles. While family abductions usually do not present the same threats as stranger abductions, these are very serious criminal offenses that can have devastating effects on children and parents.

Typically, family abduction is committed by one of a child’s parents who are involved in contentious divorce or custody proceedings. The child may be kept beyond a court allotted visitation period or the parent may pick up the child from school or daycare without permission and not return the child. In these cases, the child will typically go willingly with the parent and childcare providers or teachers may not realize that they are witnessing an abduction. In other cases, a child may be kidnapped by a family member and may face physical or sexual abuse. It is important to remember that in the vast majority of kidnappings and abuse cases, the child involved knows their captor, which may be a close family member.

Family Abduction and the Law

These cases are treated very seriously and many AMBER alerts that are issued stem from family abductions. Even where the child may not face an imminent threat of physical harm, law enforcement will treat these types of abductions as high priorities and will work to return the child to his or her parent.

International child abduction is a growing problem and occurs when a parent or relative leave the United States with a child in violation of a custody or visitation order. In many cases, the child is allegedly taken on vacation to a foreign country but is never returned. International child abduction does not occur as frequently as domestic family abduction cases, however these matters are often the most difficult to resolve because of the legal roadblocks involved when there are different jurisdictions. It is estimated that two-thirds of all instances of international child abduction involve mothers who were the victims of domestic violence. Even when there is a treaty agreement between nations authorizing the return of the child, local courts may be unwilling to return the child if that action would result in separation from the child’s caregiver or if the abducting parent would face criminal prosecution in another county.

The Hague Convention on the Civil Aspects of International Child Abduction is an international treaty intended to recover and return children who were the victims of international child abduction. In some cases, parents will hire commandos or other private individuals to rescue and recover children in foreign countries. In recent years, the United States, European authorities and non-governmental organizations have had success in using cross-border mediation to resolve international child abduction cases. This has proven to be a safe and effective way to resolve these types of situations.