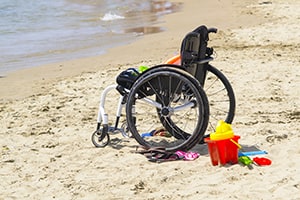 Any case involving a child who has been abducted or who has gone missing can be devastating for the child and for his or her family. However, when the missing or abducted child also has physical or mental disabilities, this can be particularly distressing and can pose unique challenges for families and law enforcement agencies. Children who have mental or physical disabilities are at a higher risk of physical and sexual abuse and finding and returning these children to their home is a top priority for law enforcement.

Wandering, also referred to as elopement, is a unique safety issue that affects children who have disabilities. Wandering occurs when a child leaves a safe area or the supervision of his or her caregiver. Children with autism spectrum disorder (“ASD”) or intellectual disabilities are particularly likely to wander from their caregivers. These situations pose unique challenges, as it only takes a few seconds of inattention for a child to wander away from his or her caretaker. Children with ASD or with intellectual disabilities may have difficulty understanding safety concerns or communicating with others, which makes it more difficult to find these children. A child with ASD may be unable to respond to his or her name when called or may be unable to state where he or she lives.

Studies show that half of all children with ASD have been reported to wander. Of these children, 25 percent have gone missing long enough to cause concern. The most common concerns include dangers posed by drowning or traffic. Children with ASD have an extremely high attraction to water, which makes drowning a significant cause for concern among parents. Children with ASD also may exhibit interests that pose dangers, including roads and highways, trains, heavy machinery, fire trucks, road signs, bright lights and traffic signals.

Local law enforcement agencies will treat reports of missing or abducted children who have mental or physical disabilities as high priority investigations and will dedicate significant manpower to finding and returning these children. In recent years, the AMBER alert system has been widely adopted as a way to quickly alert the public about children who may have gone missing or who have been abducted. The AMBER alert system is a collaboration between local law enforcement, broadcasters, cell service providers and state transportation agencies that works to disseminate information about a missing or abducted child soon after it is reported. These alerts are particularly important for abductions in which the child may have mental or physical disabilities, as the child may be incapable of seeking help or alerting authorities on their own.

In all states, kidnapping or abducting a child is typically a felony level offense and those who are convicted can face lengthy prison sentences and may even face a lifelong sex offender registration requirement. In many states, the penalties assessed may be increased when the victim is a child who is mentally, physically or intellectually disabled. In California, these enhancements will significantly increase the prison or jail sentenced that a defendant ultimately receives.