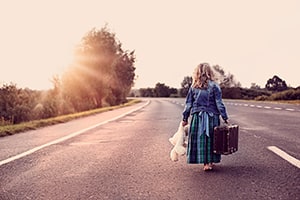 The National Center for Missing and Exploited Children has published statistics regarding minors who have run away from home. Of more than 20,500 missing children reports, 90 percent of those are what are considered “endangered runaways.” 47 percent of minors who run away from home report a conflict between themselves and their parent or guardian. Half of all runaway minors report that their parents told them to leave or knew they were running away and did not care. Females make up 75 percent of minors who run away from home and 80 percent of the girls report having been sexually or physically abused. 34 percent of runaway youth report being sexually abused before leaving home and 43 percent report that physical abuse occurred in the home.

The U.S. National Criminal Justice Reference Service has specified nine different factors that would make a child an “endangered runaway” more likely to be the victim of crime or abuse:

Runaways and the Law

In some states, it is a crime to run away from home if you are not an emancipated minor. In other states, running away from home may not be considered a crime, however a child can be taken into custody and made a ward of the Juvenile court system and either be returned to their parents or placed in a suitable home.

Many juveniles who run away from home become involved in criminal activities. Many minors are pressured into prostitution and are targeted by pimps and sex traffickers. These minors are rarely prosecuted and are often considered to be victims. Many juvenile runaways become involved in selling or transporting drugs. This is a serious criminal offense that can lead to felony-level charges. In some cases, Federal authorities may become involved and the consequences can be severe. In Federal court, juveniles who are adjudicated delinquent are half as likely to be sentenced to confinement as adults involved in the same type of criminal activities.